Another one bites the dust. Dying Light 2 becomes the next in the line of delayed release dates. This one, however, shows no sign of a release window.

Dying Light 2, the open world action sequel from Polish developer Techland, has been delayed indefinitely from its original launch window of Spring 2020.

In a statement announcing the news, CEO Paweł Marchewka said: “We were initially aiming for a Spring 2020 release with Dying Light 2, but unfortunately, we need more development time to fulfill our vision. We will have more details to share in the coming months, and will get back to you as soon as we have more information.

“We apologize for this unwelcome news. Our priority is to deliver an experience that lives up to our own high standards and to the expectations of you, our fans.”

You can read the full statement below. 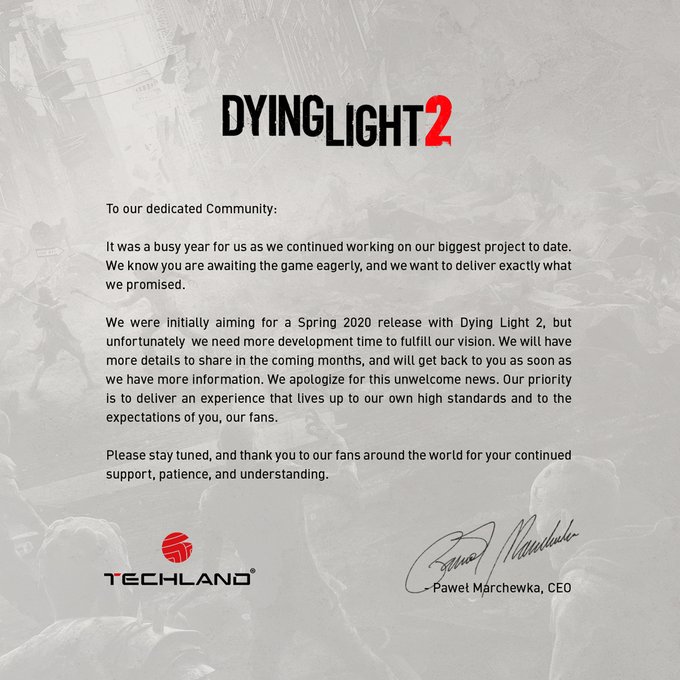 This is the fourth title to receive a significant delay at the last minute in recent weeks, after both Final Fantasy 7 Remake and Marvel’s Avengers were also pushed from their Spring 2020 window to allow for more developmental time and polish. Unlike Dying Light 2, however, each of those games received new release dates to provide some cold comfort to balance out the disappointment.

On top of that Cyberpunk 2077 has also recently been delayed by 5 months, to allow the development team extra time to “finish playtesting, fixing, and polishing”.

Techland has already confirmed that Dying Light 2 will, however, be releasing on both PS5 and Xbox Series X, but this delay could point to the team focusing on next-gen development, rather than current consoles. For now, it’s a case of waiting to hearing more from Techland.

Since we have to wait for the games to actually be good. Why not worry about the here and now, with our podcast! Check it out!

Something new to hold over all you Gears 5 fans out there? The new and free update to Gears 5